Cross country running is a running sport that takes place outside on varying terrains in which teams attempt to complete a course faster than one another. 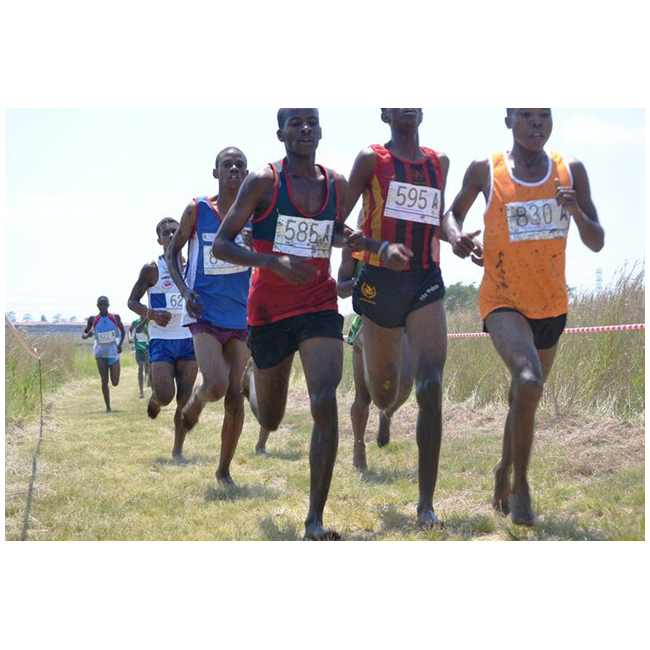 Cross country originated in England from the Crick Run, held every year at Rugby School since 1837. It has since grown to be a popular participatory sport in junior and high school, as well as at colleges. Courses generally stretch 5 Kilometers or approximately 3.1 miles. This distance is stretched to five miles for men in the collegiate ranks.

Before racing, teams will take part in moderate warm-up runs of about 10 minutes, followed by thorough stretching.

Races usually begin at a course’s starting point, which is generally out in an open area of a field or pit. Each team is allotted an equal amount of space along the starting line, sometimes enough to fit an entire team. Sometimes, it’s only enough space for only the team’s top runners to actually start at the line. A race official will then sound a gun, whistle, horn or other startling audible devices to signal the start of the race. At this point, runners take off, attempting to establish a good position in the sea of runners while maintaining a reasonable pace.

Courses are marked to create boundaries in which runners are required to stay. Miles are marked, as well, to allow runners to pace themselves. For instance, if a runner’s fastest time is 18 minutes on a 3.1-mile course, he/she will attempt to pace him/herself at each mile to assure he/she is not running faster or slower than six-minute-miles. Courses generally wind through wooded areas and culminate in an open, visible setting.

The finish is identical to that of any basic race, with a finish line marked by tape or, in bare-bones circumstances, cones and observed by race officials. Each team is then scored by using its combined score of its top five runners. The team with the lowest such score is then declared the winner. As far as individual placement, it is decided simply by where a runner finishes among the pack. Therefore, it is possible a runner could win the race by a wide margin, but see his or her team finish well out of first place if the other runners place further back.

Following the race, runners rest and then engage in a 5-10 minute cooldown run, similar to their warm up. This is again followed by stretching.

Cross country runners generally train a minimum of six days per week. On a Tuesday/Saturday race schedule, a runner will run a shorter distance Monday, in order to preserve energy; race on Tuesday; enjoy a long run on Wednesday to loosen up their muscles; take part in a speed workout on Thursday, which involves sprints on a track or up a hill; another short run on Friday; and finally, the second race on Saturday. Sunday is either used to rest or to take a longer run at a slow pace. Practices generally end with runners doing hill or track “strides”: runners go hard as they can in one direction, then jog back the other.

All About The Shoes

Runners wear training shoes during practice, but generally wear racing flats, which are lighter-weight shoes, in competitions. Spikes can also be worn depending on the weather.

Central Gauteng Athletics will be hosting the National Level 1 and 2 Coaches Course from 20 to 23...

END_OF_DOCUMENT_TOKEN_TO_BE_REPLACED

Dear Club Secretaries Trust that you are keeping safe and in good health. 1. 2022 Permanent...